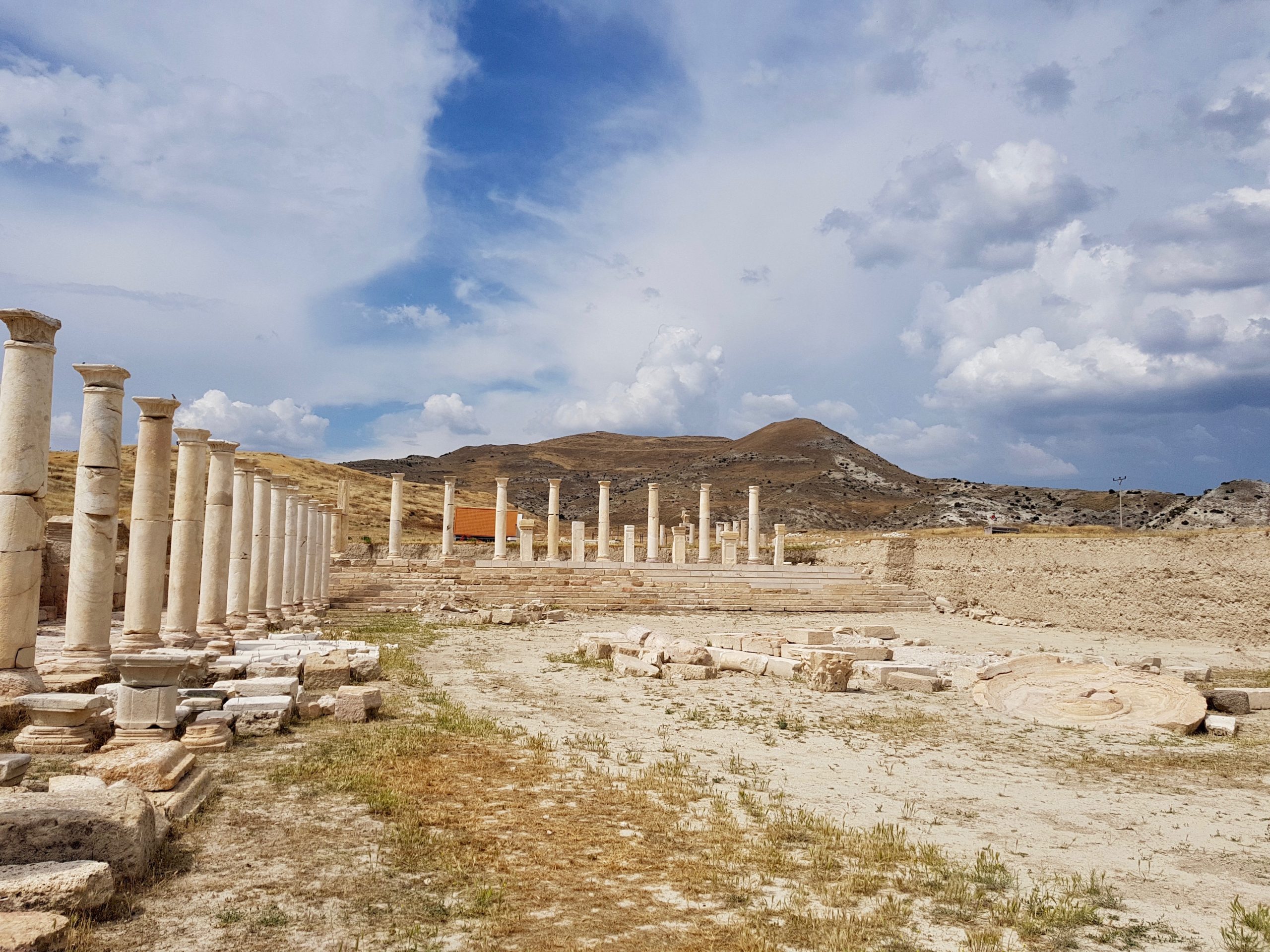 The name Tripolis takes its origins from its exclusive location between 3 regions: Phrygia, Caria and Lydia, making Tripolis an important centre for trade and agriculture in those times. The city was also known as Neapolis, Antoniopolis and Apollonia before it was called Tripolis.

Many famous writers have referenced Tripolis, for example, Pliny and Ptolemy. The city of Tripolis’ foundation dates back to the Hellenistic period (336 BC - 30 BC) Excavations in and around the Tripolis site have uncovered artifacts dating back to 4000 BC.

Tripolis prominence and prestige peaked during the time of the Roman Empire. In the 13th century the rule of Tripolis was exchanged a between the Byzantine Empire and the Turks on a few occasions. The Turks last rule of the region began in 1306 and two decades later, Tripolis was annexed under the Ottoman Empire.

Close to Yenicekent , one hard to notice signpost and an unobtrusive, small gravel road leads us to this ancient city.

We were privileged and honored to receive a private guided tour from Emre. He is one of the archeologists who has been on site for the past five years. Excavating in winter is difficult, due to the icy cold and winds sweeping the surrounding plains. Since we are the only visitors today, we can take in all the excavations and the unique landscape in peace and for ourselves. With the exception of a small village nearby the area is wonderfully empty.

What left a special impression on me are the amazingly preserved mosaics, which are still being excavated. We are actually allowed to inspect the mosaics up close and personal. These mosaics are excellent examples from the late Hellenistic / early Roman era that were created for residential adornment.

The Cryptoporticus is located next to the early Byzantine church and is very well preserved with its high arches, pantries and studio rooms. Emre mentioned that the studio rooms were used for the processing of metal, ceramics and bones. The highlight from the 2013 excavations was the discovery of a wall painting depicting a leopard. The council of Denizli even considered changing its famous symbol of its rooster to this discovered leopard but the rooster maintained its symbolic status

Further highlights at the Tripolis site are two Roman baths, a stadium and two differing agoras, The Agoras once had columns with arches, which are still fragmented and being excavated pictured below is the fallen fragments of a column that is basically still underground.

The other Agora survived in better condition, with its large and impressive columns, which, as you can see here, have been reconstructed.

Another highlight of the 2013 excavations is the discovery, found in one of the four early Byzantine churches, of unique frescoes depicting Jesus, Mary and the Apostles.

Further up the slope we saw the remnants of a theatre, which points in the direction of Buldan. The theatre, which has not yet been excavated, had an estimated capacity for 8000 spectators. Currently the symbolic audience of yellow flowers of the spurge family (Euphorbiaceae) bear witness to the circular theatre and its past performances.

From afar we hear the clinging bells from the goat and sheep herds being shepherded across the plains, which is still a charming characteristic of this region.

Emre and his colleagues kindly invited us to tea in their temporary white metal work container, while the Turkish Kangal dog, which guards the site, excitedly barks at the passing herds.

Tripolis historically held great importance in the region as an extremely wealthy trading center, due to its location. Through the constant attacks, earthquakes and its near destruction Tripolis has an indescribable air of mysticism about it, which we definitely could feel and sense.

Being an active archaeological site with excavations constantly bringing to light the unknown treasures of history. It is certainly worth visiting Tripolis every now and then.

We now continue our journey to Pamukkale, filled with all the lovely impressions from the site and friendly memories and hospitality of Emre and his collegues.